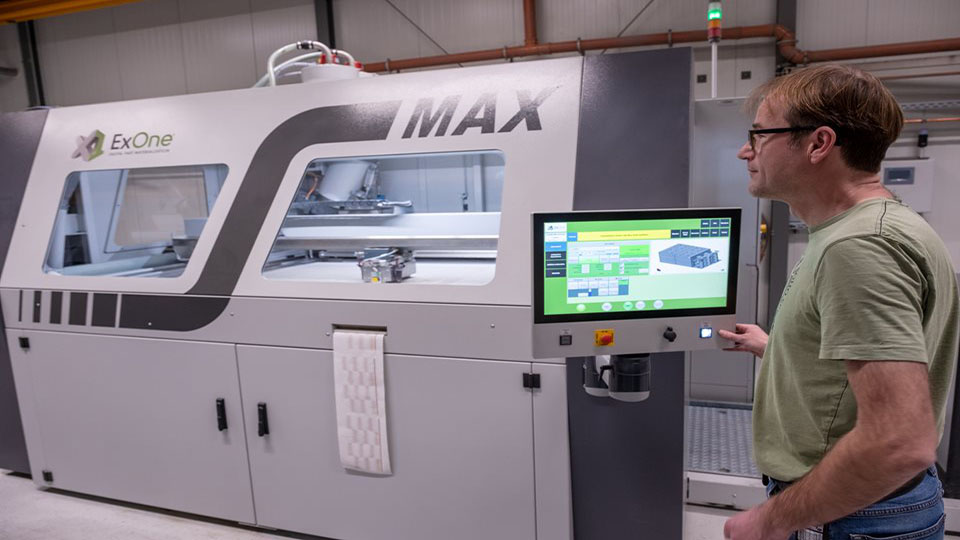 The prototype casting company Grunewald in Bocholt, Germany, invested in a 3D sand printer made by ExOne at the end of 2018.

Michael Klein-Hitpass is standing at the screen of an ExOne 3D sand printer, Type S-Max Plus, measuring about two by three meters in size. He’s currently generating a construction for four sand molds and a series of cores. On the screen, it looks a bit like he’s playing a round of the classic computer game Tetris. The individual molds and cores are slotted in above and next to each other. The only thing missing to recreate the feel of the game is for the completed rows to light up and then disappear with a bit of electronic music.

Once the box is full, printing begins. The printer head slides from one side to the other until the initial contours of the printed parts start to take shape, including the openings that risers will later be fitted into. Right now, molds are being created for structural elements as well as cores for an integral subframe that will be used by a British automobile manufacturer in a prototype vehicle. 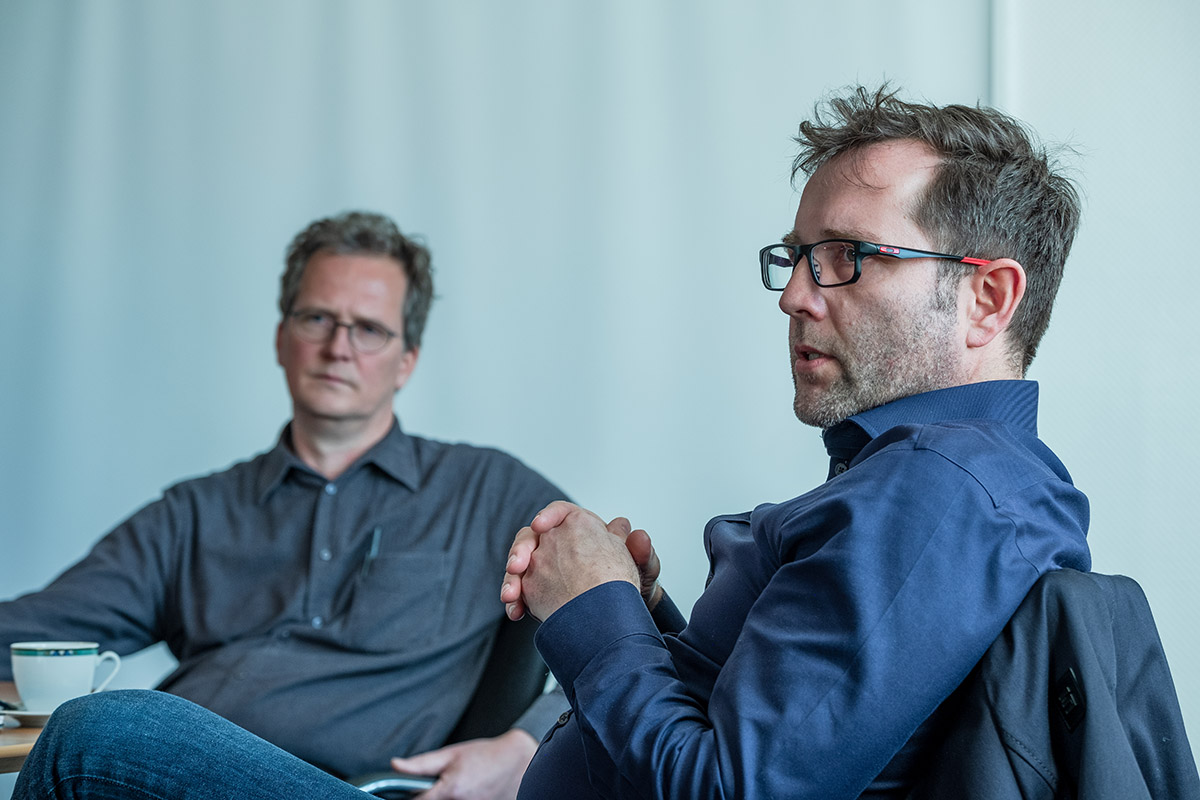 Foundry head Harald Dieckhues (left) and managing director Ulrich Grunewald. The growth thanks to 3D sand printing was a pleasant surprise for both.

The spacious – about 60 square meters – and extremely clean room where everything takes place houses the printer as well as a table for unpacking and an optical measuring system. Though the large viewing window of the printing room, one can see into the oven that is used to harden the molds and cores. Between the hoses and pipes, there’s also a yellow movable crane on the ceiling used to transport the large molds. The cost of the printer, peripherals, and other systems: EUR 1.3 million.

Klein-Hitpass is tall and lanky. With his glasses, it’s easy to believe that he has a passion for IT-based casting applications. His career, however, initially led him to become a classical caster.

An apprenticeship in model building at Grunewald, a degree in foundry engineering in Duisburg. Working on his thesis brought him back to the company in Bocholt where he had completed his apprenticeship. “I never would have thought that the 3D printer would be so well utilized,” he says. And his bosses, Ulrich Grunewald, managing director of the corporate group of the same name with locations in Bocholt and Irxleben in Germany, and foundry head Harald Dieckhues, couldn’t agree more.

After the system was installed at the end of 2018, the job boxes tended to be only half-filled. Since spring of last year, though, the machine has been running almost around the clock. While uncertainty in the automobile industry is currently putting the brakes on business for suppliers for conventional vehicles, Grunewald is benefiting from the possibilities in freedom of design and lightweight construction offered by 3D-printed molds and cores. And these characteristics are in particularly high demand from electric vehicle manufacturers, which will account for an ever-increasing share of vehicles in the coming years. The team in Bocholt is currently manufacturing structural components, drive technology, chassis and engine parts as well as battery trays for the automobile manufacturers’ prototype vehicles – more and more often with 3D-printed sand parts, poured off with aluminum. Grunewald manufactures parts for vehicles that are still being tested and will be qualified for market launch in preproduction tests, for example in test drives in the harsh Swedish winter.

Over a year after installation, any anxiety about the risk of the investment has definitely transitioned to happiness about the good development. Just how good the development has been was evident in the sales at the foundry in downtown Bocholt that was opened in 2013. While its share of total sales for the company was at around 50 percent before the printer was purchased, it is now at 75 percent, thus offsetting the decrease in other areas at Grunewald, such as tool manufacture, which largely depends on conventional automobile construction.

The design freedom is one of the main benefits of 3D printing. There are cores and molds that can only be created through additive manufacturing due to their complexity. If they can still be cast, the current technological limits of casting technology have been reached. In addition, there’s the speed of the printer. “Depending on the part, its complexity, and the workload, we are at least four to six weeks faster than conventional casting manufacturing,” Ulrich Grunewald states as the main reason for the acquisition of the high-tech machine. A job box with 1,260 liters of foundry sand (2.14 metric tons) is completed in 24 hours.

More options for customers and designers

The printer thus combines a whole slew of additional benefits at Grunewald, which hadn’t even been considered before the acquisition. “With the printer, we are now also seen as a technology company,” Grunewald and Dieckhues have also observed. The technological leap thanks to 3D printers thus helps the image of modern foundries. The way of thinking is also changing:

“Our designers are now thinking completely differently because there is also the option to print molds and cores instead of just manufacturing them in our semiautomatic mold system,” Grunewald concludes. Then an additional core might be printed, too, if there’s still room in the job box – freedoms that one doesn’t have when printed sand parts have to be bought in at high prices.

A delicate process that comes with quirks

In the printer room, the discussion has now progressed to the costs of 3D printing. “Compared to a shot core, a printed core is still very expensive,” Dieckhues states. The commonly held opinion that this is due to the high costs of electricity is not accurate according to the foundry head, who completed his training as a master foundryman at the Wilhelm-Maybach-Schule in Stuttgart. Energy comes in third, behind maintenance and chemistry – meaning binders and sand. “It’s a delicate process, not to be compared with the robust foundry systems that we use otherwise,” Grunewald describes. Printer heads can become clogged and replacing them could cost five-figure sums, which makes maintenance expensive and tricky as a result. Benefiting from the advantages of the system also requires well-trained workers, as the process is complex and the list of potential problems is long.

In fact, the Grunewald company has been experimenting for over 25 years with the technology that has been known as rapid prototyping since the mid-nineties. Sand sintering promised more than it could deliver back in the day: the parts were either too soft or too hard, which meant they couldn’t be used. Klein-Hitpass was interested in the technology already back then. Since then, he has also had a colleague at his side who originally trained in model making at Grunewald and also has many years of experience with 3D printing. The knowledge of these two experts is now really paying off in using today’s machines. 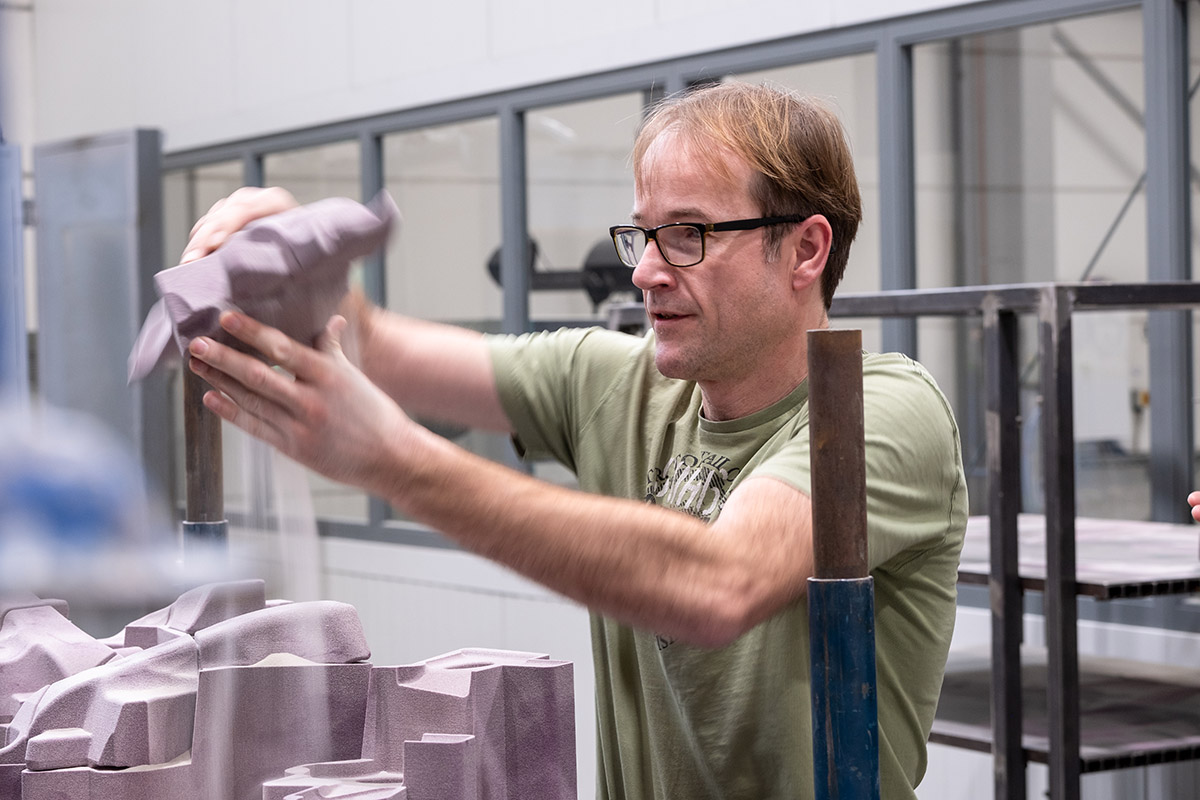 Klein-Hitpass demonstrates the ease of desanding the cores after printing. This is made possible by the use of phenol cold resin binder made by ASK Chemicals.

Looking through the printer’s viewing window, an additional layer is added about every half a minute and glued with the sand using phenol cold resin binder made by ASK Chemicals. The benefit of this binder, compared to the commonly used furan resin, is the reduced need for subsequent work – the leftover sand can just be shaken off, whereas with furan resin it could still stick to the sand parts. Klein-Hitpass demonstrates this with one of the cores that is on a pallet along the wall of the printer room. At first glance, cleaning the hardened sand parts is literally child’s play. The parts are cleaned after printing using a sand vacuum; next up are the process steps of smoothing and casting.

Whether the future of Grunewald looks like that of the Japanese company Kimura, where the foundry is filled around the clock with cores and molds from about ten 3D printers and not a single piece of pattern equipment is in use, remains to be seen. “At the moment, we need both – pattern equipment and the printer,” Grunewald admits. Instead of the initial problem that the machine was too productive to utilize its full capacity, now its capacity is almost not enough and the 24 hours of production are too short. “Who knows how it will be in two years,” Grunewald said, replying to the question whether the company is considering the acquisition of a second printer. Now that the process is understood, the foundry is looking to qualify two additional machine operators in the short or long term to ease the load on Klein-Hitpass and his colleague.

Will the 3D sand printer soon be indispensable?

How great the potential of 3D printing is for the casting industry is evident at the meeting of the additive manufacturing work group at the seat of the foundry industry in Düsseldorf at the end of January: A representative from BMW had joined, who reported that 3D printed cores were already in use in serial manufacturing in Landshut. “Increasing the temperatures in the engine requires cast parts whose complex geometries are only possible with printed cores,” Grunewald cites as the reason the automobile manufacturer is now embracing the use of 3D printing. Time will tell whether this strategic alignment in core manufacturing will remain an isolated case or will become the norm one day.

At Grunewald, it is certainly clear one year after introducing the 3D printer that it has paid off. Strategy for the future: continue automating to give the employees the freedom they need to do their specialist work and also generate sufficient sales to be covered in tougher times as well. A plan that suits a medium-sized company like Grunewald with its 200 employees well and is aimed at long-term and sustainable continuance. 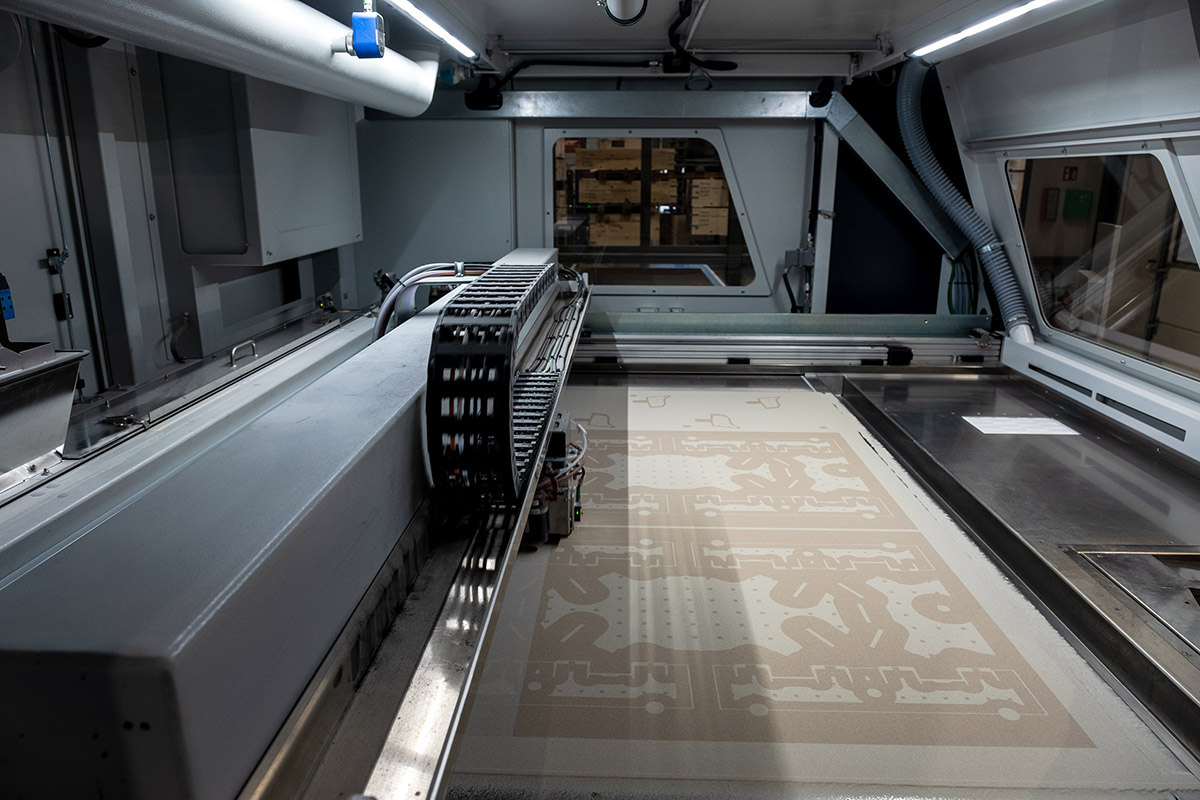 The contours of the molds and cores are starting to take shape in the 3D printer. 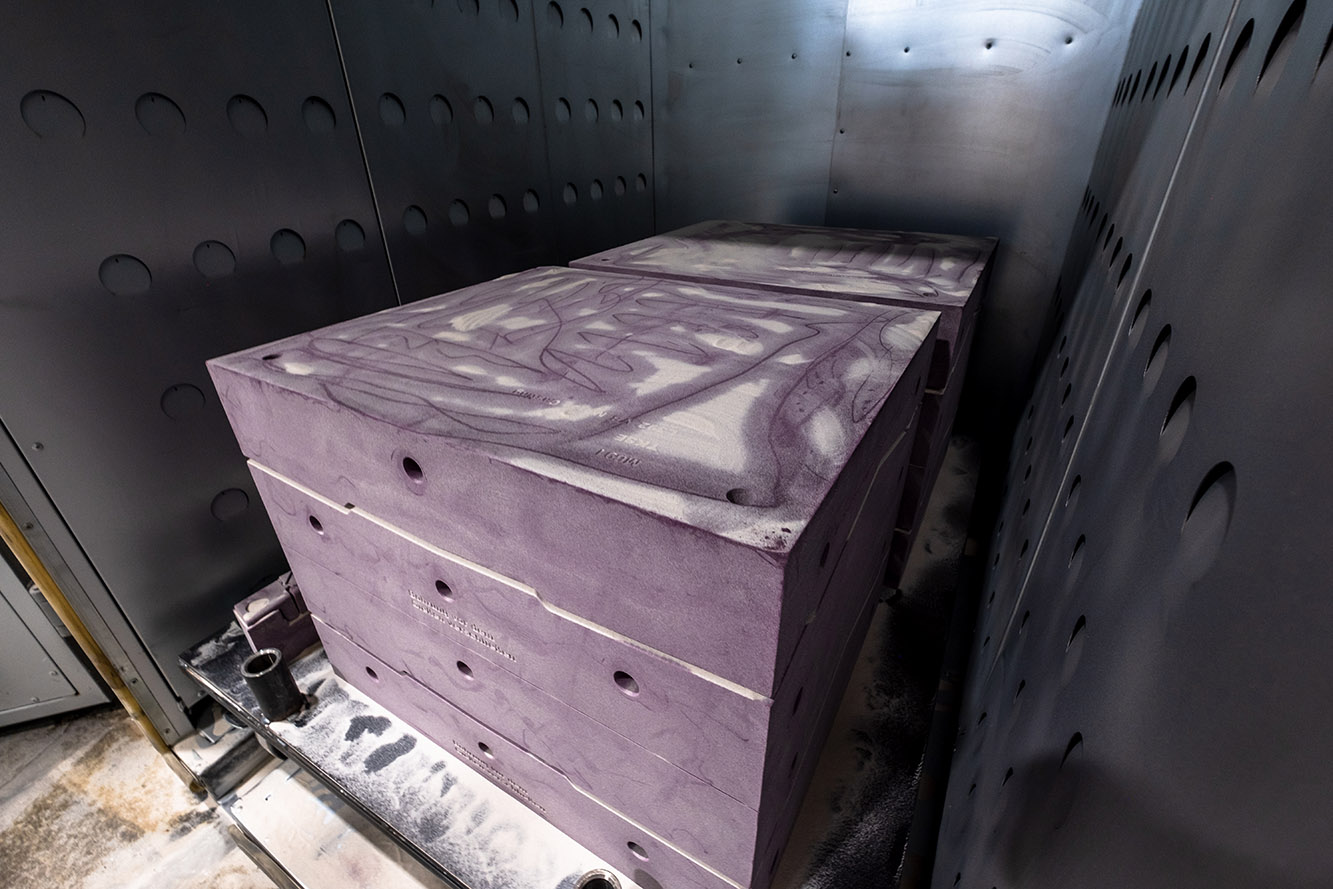 Printed molds are hardening. The parts customers are asking for are getting bigger and bigger. 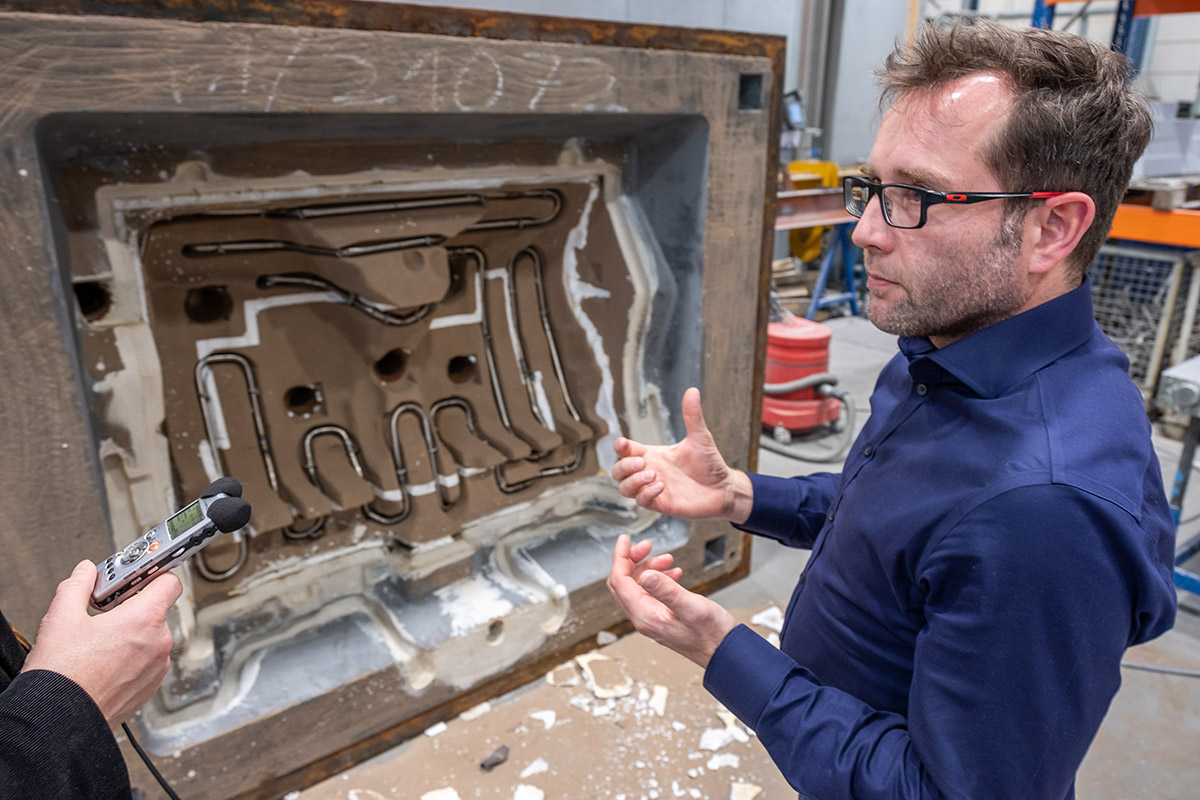 Ulrich Grunewald in front of a mold for an aluminum mold tool with integrated cooling for automobile floor carpets.