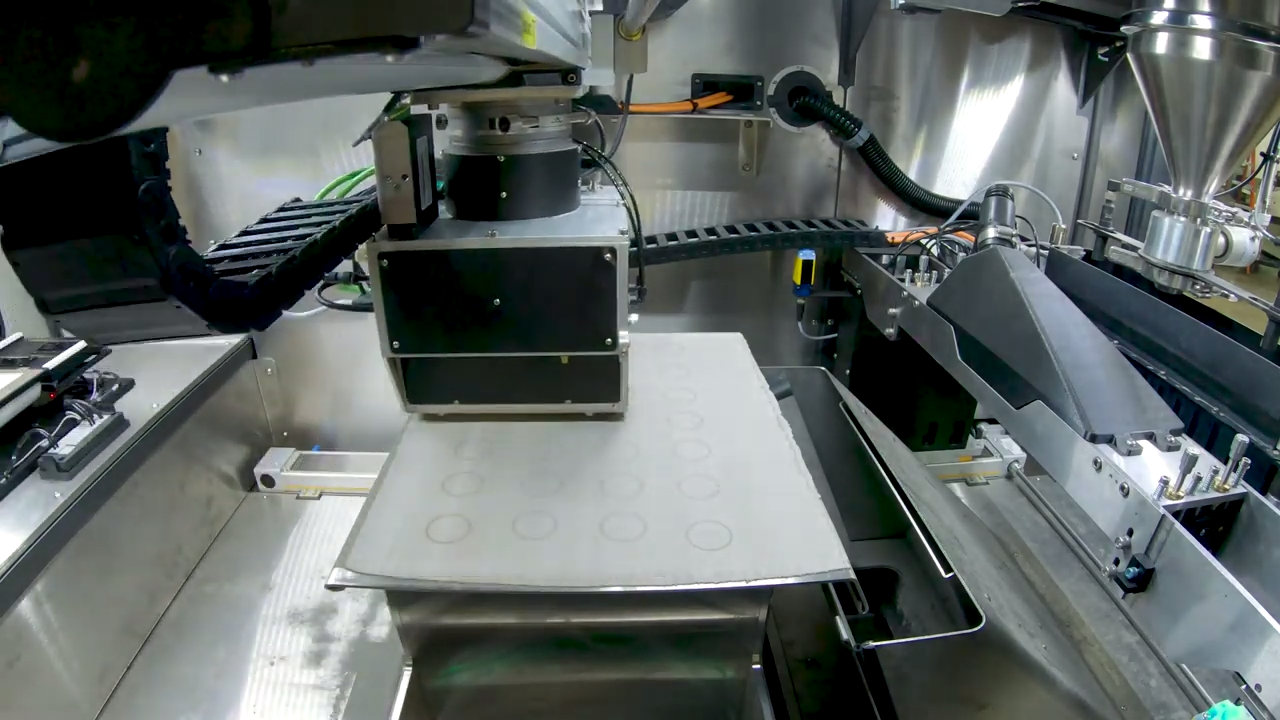 The short answer: quality and flexibility

It's a fair question, and one we're asked frequently.

Before we get into the details, though, what, exactly is  "single-pass” binder jetting?

Binder jetting itself is a 3D printing process that uses a digital file to quickly inkjet a binder into a bed of powder particles — metal, sand or ceramic — creating a solid part one layer at a time. When printing metals, the final printed part must be sintered in order to fuse the particles together into a solid object.

To execute this process, a few core things must happen:

Most every company in the binder jetting market today executes the powder-coating and printing functions separately, including HP and Digital Metal.

The Single-Pass Concept is Announced

In April 2017, Desktop Metal announced the new Single Pass concept, saying it delivered breakthrough speeds and would be offered in its Production System, a large metal binder jet printer, which was set to begin shipping in 2018.

The bi-directional system is explained this way on the company’s website: “All steps of the print process — powder deposition, spreading, compacting, ballistic suppression, and binder jetting—are applied with each pass over the build area.”

Using this approach, the Desktop Metal Production System, whose shipping date is now slated for the second half of 2021, is said to print up to 12,000 cc/h. 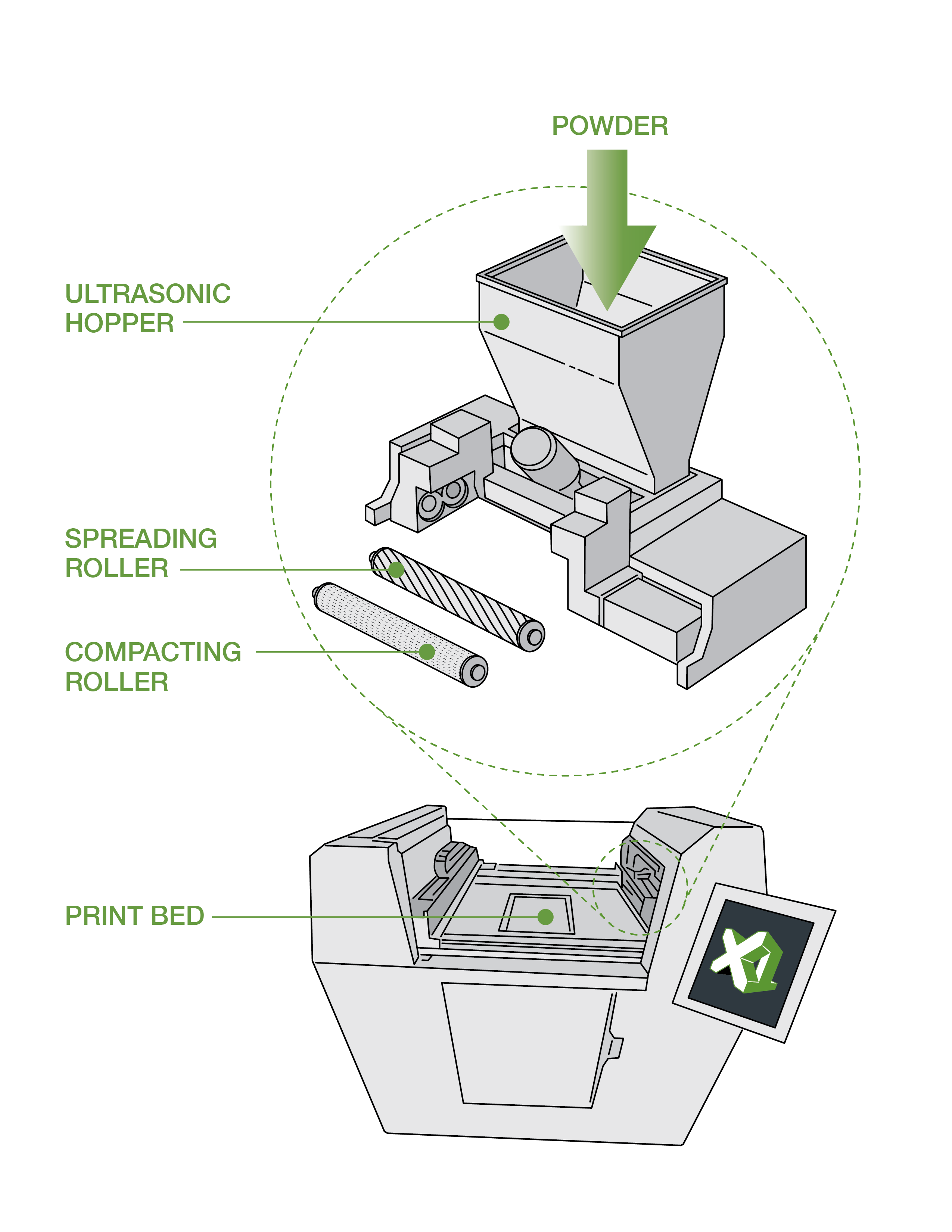 ExOne's patented Triple ACT dispenses, spreads and compacts fine MIM powders in discrete functions with different parameters across the print bed.By contrast, ExOne lays down powder first with its Triple Advanced Compaction Technology (ACT), which has discrete functions for dispensing the powder and spreading and compacting the powder layer with a highly-engineered double-roller system. Every layer is about three particles high or 30 micron. To put that in lay terms, the diameter of a human hair is about 70 micron, while 10 micron is more on the scale of a red blood cell.

Then, our printers inkjet binder onto the particles in a completely separate function. Finally, the Triple ACT system heats the printed area before adding its next layer of powder.

All of ExOne's metal binder jet systems offer Triple ACT technology and print in this style, with the X1 160Pro offering a max speed of 10,000 cc/h. It's an approach that has enabled us to qualify 23 metals, ceramics, and composite powders, including, most recently, 6061 aluminum.

So, why doesn't the team at Exone think the single-pass approach offers the best part quality or material flexibility?

As the most experienced commercial seller of binder jet 3D printing systems, we individually control more than 20 discrete parameters with recoating and binding every material. Some of the basic ones are powder spreading roller speed, binder droplet velocity, and heating time and temperature. 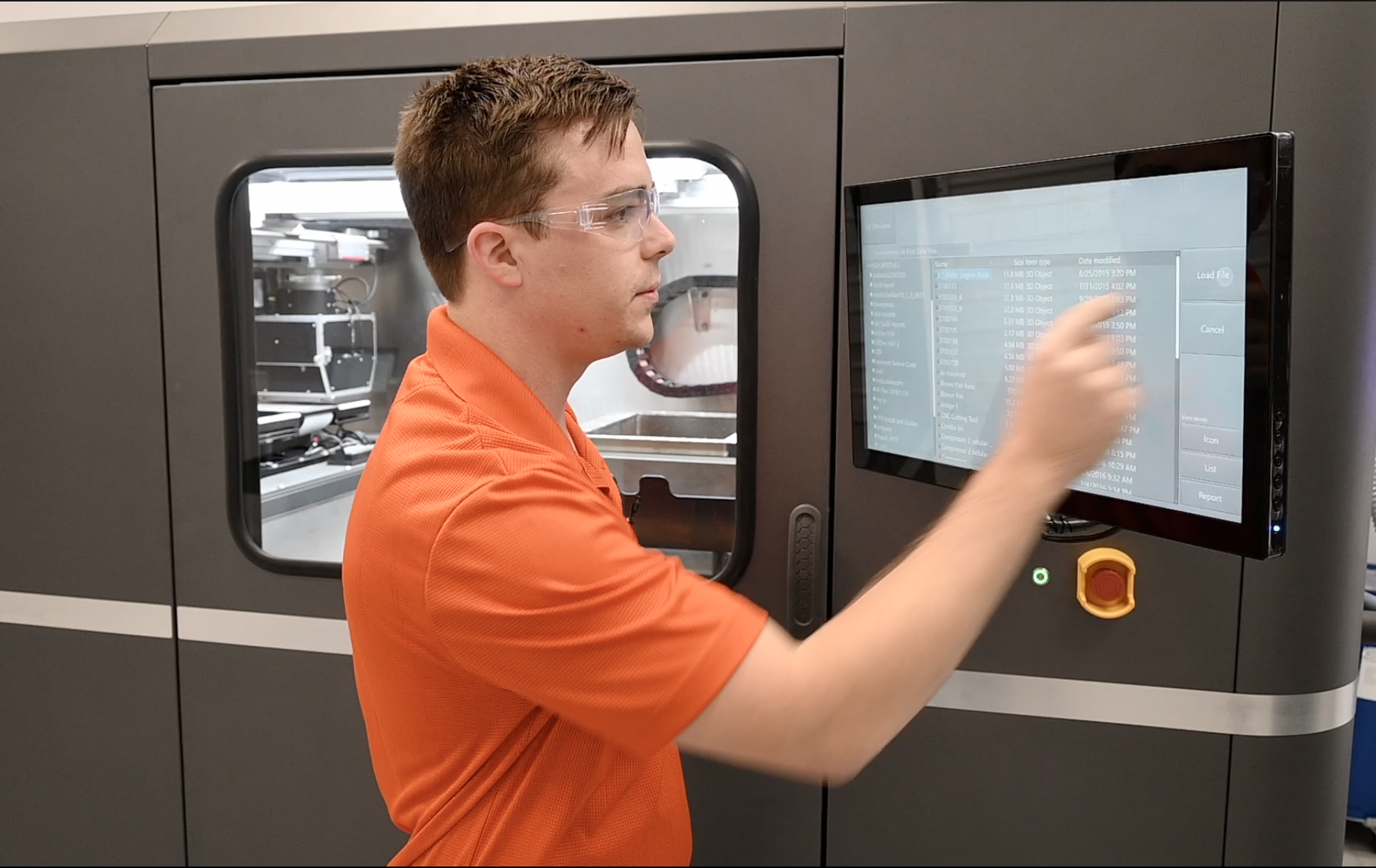 The X1 25Pro is one of ExOne metal binder jetting systems with controls for more than 20 key parameters.Every single powder that we print — which includes two dozen metals, ceramics and composites — has its own shape, sizes and print parameter requirements. Even within a single material category, such as 316L stainless steel, a different size powder may require a different spreading or compaction speed after the powder is deposited onto the bed. Or even a different droplet size, shape, or deposition speed.

Sometimes if you go too slow or fast the powder can actually reject the binder, and it can bounce right off the top of the particles, especially if the powder hasn't had time to order itself, like a bunch of marbles settling to the bottom of a jar.

We also carefully time the differences between laying powder down, which takes a relatively long time, and printing the binder, which is relatively fast, to make sure the binder has time to seep around particles — or wet — the print area.

When you tie all of these parameters into one single system on a single gantry that has to move across the print bed at the same speed, you essentially lose control of many of your process settings. What's more, you also lose most of your ability to time the differences between them. In ExOne’s experience, determining the proper parameter for all of these individual elements is important engineering work that requires tight control, and important timing differences, between the various functions.

At ExOne, we call this important collection of parameters the ExOne Recipe Engine, and it's what produces the best possible parts for every different material type and size. With 20+ parameters, there’s actually an infinite number of potential combinations in a Recipe Engine, as each one has many potential values on its own (such as temperature of the heating element).

What’s more, ExOne can, and often does, program different parameters for different layers based on the part and geometry requirements. Sometimes it’s even helpful to run certain layers at different speeds for certain discrete functions based on the geometry.

So, to sum it up, when you combine all these settings onto a single gantry that moves across the print bed at the same speed, it looks efficient, but you literally have to find the one and only passing speed where all of those parameters successfully interact to produce a high-quality and high-density part. With one speed, our team feels you'll always be giving up something in one parameter or another. Ultimately, you may have to go with a lowest common denominator approach.

Interestingly, the Desktop Metal Shop System, launched in 2020 and announced after the Production System, does not appear to use a single-pass system the way the company has defined it. A distributor video of the process shows the system uses a separate function for spreading powder and printing that is distinct from the single-pass system first announced in 2017.

"You Lose Knobs to Turn"

Years before single pass entered the 3D printing lingo, ExOne’s experts concluded that machines built with a single system for recoating powder and printing binder would not likely deliver the best final microstructure, which is often only revealed after sintering.

It’s important to note what should be obvious here: a part's microstructure isn’t actually visible to the naked eye. But taking a look at how these particles have densified and ordered themselves after sintering is important; having spotty porosity can lead to weakened parts with questionable integrity. 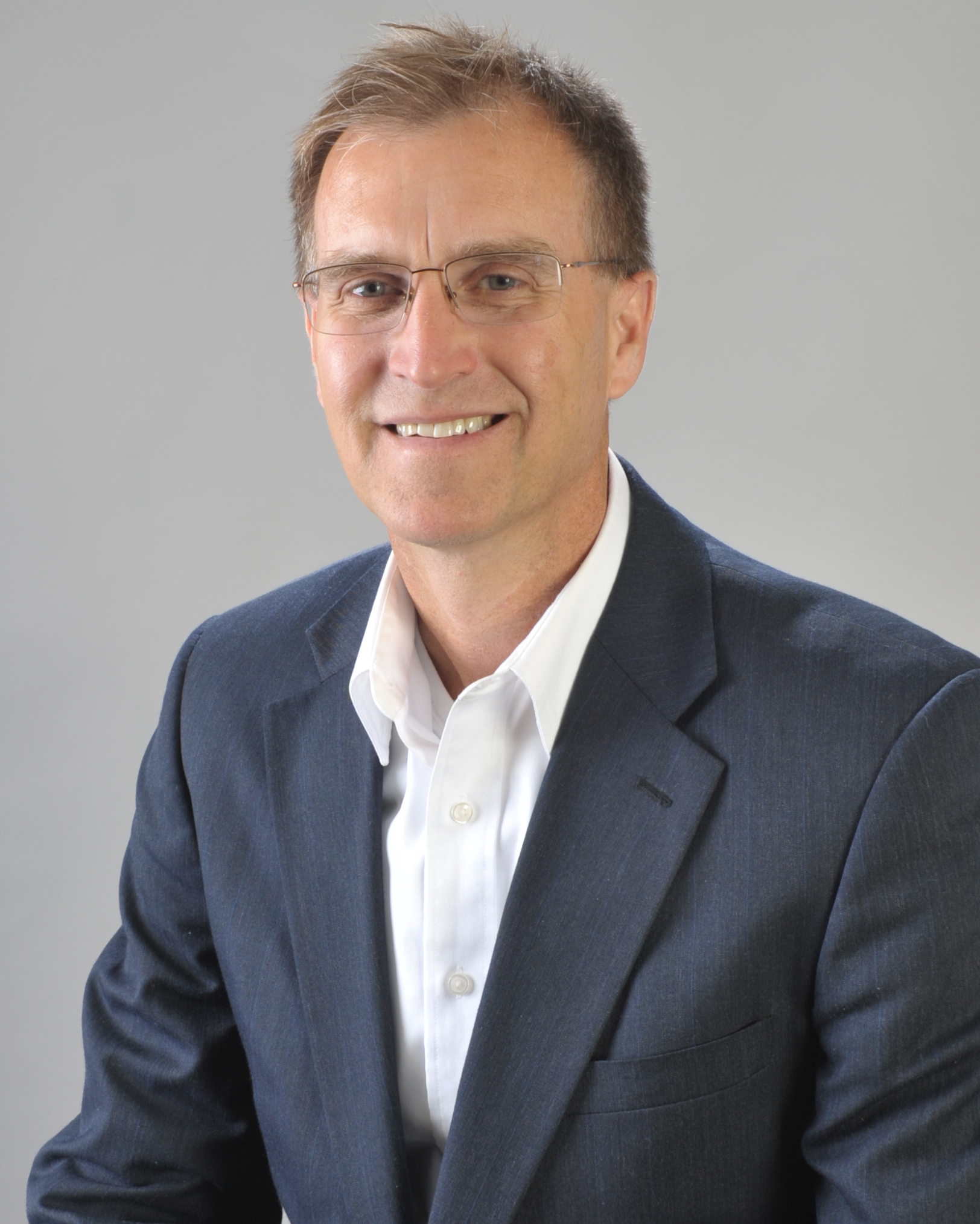 Rick Lucas, ExOne CTO and VP, New MarketsThis may not matter very much for a prototype, but since ExOne's metal machines are built for production of industrial parts, we believe these parts need the highest quality that binder jetting can deliver, and that, in turn, requires the tightest parameter controls.

“Everything has to go the same speed when you tie it all together in a single-pass system,” Brunermer explained. “It’s better to be able to control the delay between the recoating of the powder and the heating and the binder. You need the binder to soak in, even if it’s for a half a second. Chemical reactions have a time constant, and there are true physics and fluid dynamics at play.”

ExOne Chief Technology Officer Rick Lucas also noted that the approach was discussed and rejected for these very reasons. “We intentionally didn’t do it years ago,” Lucas explained. “It limits the timing between the discrete functions. You lose knobs to turn when you do it that way. There’s limited adjustability.”

UP NEXT: Why ExOne printers raster and don't require redundancy.